You are here: Home » Media should be decentralized: Subhash Singh

Media should be decentralized: Subhash Singh 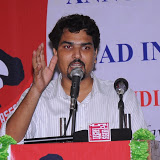 That’s why at present the role of media is very important. In a way media is exposing corruption prevailed in various government body, it increasing people’s trust in media. So the media has to be very cherry and cautious to maintain this trust. Keeping this role of media in view as per the terms of the old retention media can’t be assumed mere a mirror of society or semi literature.

Because mirror doesn’t have any opinion and literature includes some tinge of imagination so media is no longer can be keep in those category. Today’s media can be called forth pillar of democracy in real sense. Media inspiring people, waking people and, proving a better sentinel of society as well.

We feel that Media’s job is not only to criticize but to take positive aspects highlighted. Lead India Group through its newspapers and web portal trying to fulfill this big responsibility. Now a day, we are noticing a deviation in present journalism. Sometimes readers/viewers notice that the news of their interest is su

We put our endeavor to ensure that news should not be compromised on the cost of commercial compulsion.Over time media is also being witnessed disorientation. In today’s scenario we are facing a concept the news without the check getting fast. This trend especially visible in the well established newspapers and broadcasting media. It is because newspaper with larger circulation has to maintain larger resources that required money to maintain and sustain.

This begets paid and compromised news. While at the newspaper with small circulation try to maintain their news values. They want their readership on the basis of news rather than gossips and semi nude pictures.Today journalism has centralized. It’s amazing that in so large country there are few newspapers leading the news. That’s why it’s quiet necessary for the journalism to be decentralized. It can only possible by encouraging small newspapers.

Large number of newspapers will enhance the authenticity of news. It will be impossible to distort any news for some hidden interest. I always feel newspaper with small circulation assessed petty, though they are proving their worth. It is also crystal clear that I am not talking about such newspaper that have motto to earn status or money by hook or crook and journalistic mission does not matter for them.

I talked about decentralization of news because it will make difficult to sponsor any news. It will put full stop on paid news concept. Keeping this in view Lead India Group conceives to bring publishers from all over India on one dais. That’s why Lead India Group initiated ‘Lead India Publishers Association’. Which is consistently stands to help newspaper publishers.