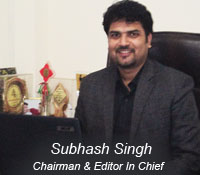 Mr. Singh is an author too. Mr. Singh started his career from Jansatta as print reporter and also worked for Zee news. He was Associate Editor in Delhi Varta Group. Mr. Singh Executed Landmark sting operation against Killer Blue Line buses of Delhi. This Sting Operation exposed the Collusion of Bus contractor, Delhi Traffic Police and some corrupt Officials. This sting proved a mile stone to sweep out the dirt of that killer trio collusion. The buses removed immediately and culprit was punished.

Books: 2014: Existence of Regional media and Its importance (Under Publishing)

Family: Mr Subhash Singh’s father served nation as Army Man, his mother is home maker. He has one elder brother working as regional manager in Dulux and his sister in law is working as chief relationship officer in American Express, an elder sister serving her home and Mr. Subhash’s wife practicing as advocate in Delhi. According to Mr. Singh “I love to be family man and don’t like those who believe family means only his wife and children.”

Dr Taruna S. Gaur is co-founder of Lead India Group. Full of Enthusiasm and passionate journalist Dr. Taruna S. Gaur was very much agitated with various inhumanity, malpractice, and corruption existing in society and thus she decided to join journalism to expose all these with a never compromising attitude. Journalism is in her blood. Her first write up was published in Dainik Jagarn when she was studying in 7th Class. Having done M.A. in English (2000) and Mass communication and Journalism (2002-2004) she started her career in Print Media. Her story on Leprosy Patients left a deep impact among readers, this story got selected for best story by Dainik Bhaskar management in 2004.

After working in Jhansi she shifted to Delhi and served journalism through various print media houses at different designation. She worked in Mahamedha  and Virat Vaibhav as reporter, Delhi Varta as sub editor. She also had some experience in electronic media. She joined S1 National News Channel in 2006. After working some time in electronic media she Mr Subhash Singh started their own Print Media house in 2007 .  Right now She is working as Group Editor in “Lead India Group”. She played a pivotal role in establishing Lead India Publishers Association “LIPA” and serving as general secretary. She has also completed her  Ph.D. work on management and circulation in regional media in 20019.

Dr. Juliana Glöckler-Fuchs is associated with Lead India Group as International content adviser. Dr. Juliana has her education in University Augsburg, Germany, Doctorate in Political Science, Diploma in Ethics / Philosophy and Master of Environmental Sciences. She had worked with many famous International personality as well as organizations in different countries. Dr. Fuchs has visited to Italy, South Africa, Ukraine etc., for her studies and work.

Since Oct. 2004 living in India, Wrote a proposal for the WWF India to the subject “Evaluation of the Education and Awareness of Biodiversity/Environment in Indian Secondary Schools”. Dr. Juliana has very good hold on foreign affairs and politics. She is also working in German embassy as German-Indo student coordinator in India.

Highly Positive and cheer facing towards the adverse situation of life Mr. Bhagwan Jha is Financial Advisor of Lead India Group. Simultaneously he is keeping all responsibility of Group’s Publication as Circulation manager. He is CA too and treasurer in Lead India Publishers Association (LIPA). He topped LNMU Bihar in 2006 and completed his CA exam in 2012.

Fearless Journalist  Rakesh Jha worked as reporter in Patna, now for 2 years he is giving his services in Delhi Edition of Lead India Hindi Daily. Graduate in Account and passionate with journalism he has been associated with Lead India’s project Burari as Reporter.

Ajay Vikram Singh is very popular face among political journalist. He has done post graduate diploma in Mass Communication and Journalism from Bhartiya Vidhya Bhawan. He has worked in DD NEWS. Ajay always says ‘News means, which reflects meaning of public life, which aware the common man about their rights and duties. Mr. Ajay is associated with Lead India Group as political correspondent.

Ram Bihari Sharma has done his bachelor and masters in political science from Patna University. Then he went to hone his journalism skills from IGNOU. He is working as correspondent for Lead India Group and covering news from different Beat .

Yashwant has done his bachelor in pharmacy from Indraprastha University Delhi his masters in business management from Birla Institute of Technology Mesra, besides this he had worked as co-chairman press and publicity committee in Indian pharmaceutical congress, Delhi.  Yashwant is associated with Lead India Group as Senior Marketing Officer.

Pravesh Kumar Sharma has very good skill for media marketing. He has long experience in this field. Simultaneously he has great interest in journalism and has good sense of news. Besides marketing to skilled himself in journalism he completed his journalism from IGNOU. He is associated with Lead India Group as Marketing Executive.

Mahendra Munda is very dedicated towards his hardware profile. He has done bachelors from Vinobha Bhawe University (Economics Honors) in 2005. He is specialized in Microsoft certified system and IIHT certified network. Proved is quality in O.A. conserve pvt. Ltd.. Done his MCSE from INT Delhi, ICNE from IIHT, Jharkhand. He is working in lead India as System Engineer..

Shakti Singh reflects a very versatile personality. He has done bachelors from Vinobha Bhawe University (History Honors) in 2006. He is specialized in web designing and 2D animation. Shakti has successfully published many websites in Hindi and English. He had done 3D animation from Arena Multimedia, Delhi.

Avinash has done his bachelor in Economics from Bhim Rav Ambedkar Bihar University in 2008. Then he completed his journalism from IGNOU. He is working as Trainee Reporter for Inside Story and Lead India. He covers political and sports beat.

Pawn has done Master of Arts from Nalanda University. Than he got specialization in document examinations and  fingers prints from Delhi University. He is working in Lead India Group as correspondent for crime beat.