You are here: Home » Dr. Kalam an undying inspiration and his guidance for Lead India

Dr. Kalam an undying inspiration and his guidance for Lead India 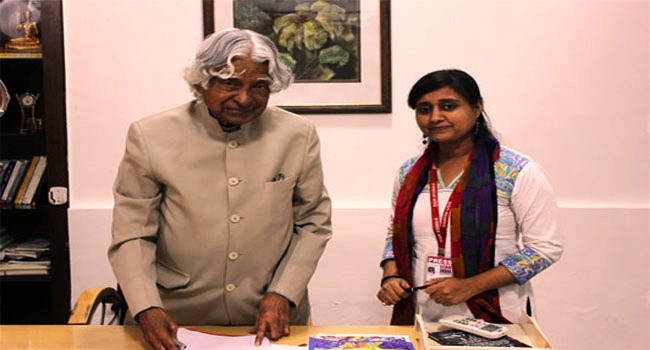 A scientist, a teacher and above all, an inspiration for us and many generations to come, Late Dr.A.P.J. Abdul Kalam believed that the youth can bring about a revolution in the making of a nation. He invoked youth of all fields to give their contribution in making India Develop country till 2020.

Inspired by his words, vision and mission the lead India Group was formed in 2007 under his guidance. He was the mentor of Lead India Group he gave various valuable and serene advise to us whenever we were in need. Later when Lead India Publishers Association (LIPA) was conceived and formed in 2010, Mr. Subhash Singh sought Dr. Kalam’s advice in this matter too.

Lead India Publishers Association (LIPA) is a very visionary initiative of Lead India Group and Dr. Kalam had great hope with it. There is an undying respect for the great teacher in the hearts of each and every member of Lead India Group. He had promised to address the 5th annual convention of the LIPA on 23rd Aug 2015 in Hyderabad. But fate took him away from us a month before that, on 27th July 2016.

So Lead India Group decided to devote a separate edition Lead India weekly to people with a very unique concept of Journalism to pay him true homage.  This weekly Newspaper will give news to the people following the guidelines of Dr. Kalam and will play an important role in development of that area. Gradually Lead India will launch more Edition of Lead India weekly based on this concept. We believe that these Newspapers will contribute a lot in Dr. Kalam’s vision of developed India till 2020.

First Edition based on this concept will start in 2017 from Burari Constituency of North Easth Delhi.

When Mr. Singh returned to India with a degree in Public Relations from Berlin University of Professional Studies, he conceived an idea to provide a platform for those individuals who had the potential to lead and motivate the nation through journalism. For this The Lead India Group was instituted in 2007 under the leadership of Mr. Subhash Singh and the execution part was well managed by Miss Taruna S. Gaur with a young and dynamic team.

In a milestone achievement, today Lead India English Daily is the largely circulated English newspaper in Kochi. leadindiakhabar.com, a hindi news agency started by Lead India boasts of above 7000 newspaper subscriptions The group started its news portal called leadindianews.com, which has 30 K per day hits.

In order to encourage and empower newspaper Publishers, the Lead India Group formed the Lead India Publishers’ Association (LIPA) in 2010; which currently operates in 17 States with a membership of above 7,000 regional newspapers; enabling regional media to become the voice of its domicile.

LIPA is now the country’s largest media association bringing together the publishers of various newspapers, magazines and journals; who are working as multiple units. It’s a non-government organization with the goal of uniting publishers on one stage.

Newspapers and journals of every state and Union Territory is a member of the association.

In the domain of regional media, ‘Lead India Publishers Association’ is popularly coined as LIPA

Among 15000 active newspapers, above 7 thousand are members of LIPA.

Lands are allotted to LIPA in Jharkhand and Noida for Bhawans (Building) for the members of LIPA.

“Lead India 2020 is the 2nd National Movement, a mission-oriented programme for transforming youth of the country. I am confident; this movement will transform youth to achieve developed India by 2020.

India has to be transformed into an economically developed nation by 2020.  Every citizen and every constituent of the country has to participate in the Lead India 2020 – a national movement to lead the Indian youth who constitute 55 per cent of the country’s population, to lead India to lead the world by 2020.”  Late Dr APJ Abdul Kalam

We believe that media can play pivotal role in Lead India 2020 vision which was started under the mentorship of Late Dr.A.P.J. Abdul Kalam – A mission oriented program for transforming the youth of the country. So we have associated our weekly newspaper with this mission. Burari project of Lead India will contribute a lot in this as it will publish the stories of heroes who will contribute in this vision. Lead India’s Burarai Project will focus on the positive news, problems and achievements of that area.

A brief bio of Dr. Kalam

Bharat Ratna Avul Pakir Jainulabdeen Abdul Kalam, generally known as Dr. A.P.J. Abdul Kalam, was the 11th President of India (2002-07). He was elected against Lakshmi Sehgal in 2002 and had support from both the Bharatiya Janata Party and the Indian National Congress, the two leading parties of Indian politics. By profession he was a scientist and an administrator in India.

He worked with Indian Space Research Organisation (ISRO) and Defense Research and Development Organisation (DRDO) as an aerospace engineer before becoming the President of India. His work on the development of launch vehicle and ballistic missile technology had earned him the name of the ‘Missile Man of India’. The Pokhran-II nuclear tests conducted in India in 1998 after the age-long original nuclear test of 1974 saw him in a pivotal political, organisational and technical role.

In his book India 2020, he has recommended plans to make the nation a fully developed one by the year 2020. His interactions with the student community and his motivational speeches have made him quite popular among the youth. In 2011 he launched a mission called ‘What Can I Give Movement’ aimed at the youth of India, which focused on defeating corruption in the country.

Avul Pakir Jainulabdeen Abdul Kalam was born into a Muslim family on October 15, 1931, on the island of Dhanushkodi off the southeastern coast of India. He developed an early fascination with flight by watching birds, which developed into an interest in aeronautics after he saw a newspaper article about a British fighter plane.

Despite his modest beginnings – his dad built and rented boats – Kalam was a bright student who showed promise in science and mathematics. He attended St. Joseph’s College, and went on to earn a degree in aeronautical engineering from the Madras Institute of Technology.

Rise to the Presidency

His hopes of becoming a fighter pilot was dashed when he narrowly missed out on a spot with the Indian Air Force. Kalam instead joined the Defense Research and Development Organization (DRDO) as a senior scientific assistant in 1958. After moving to the newly formed Indian Space Research Organization (ISRO) in 1969, he was named project director of the SLV-III, the first satellite launch vehicle designed and produced on Indian soil.

Returning to the DRDO as director in 1982, Kalam implemented the Integrated Guided Missile Development Program. He then became the senior scientific adviser to India’s defense minister in 1992, a position he used to campaign for the development of nuclear tests. Kalam was a key figure in the May 1998 Pokhran-II tests, in which five nuclear devices were detonated in the Rajasthan Desert. Although the tests resulted in condemnation and economic sanctions from other world powers, Kalam was hailed as a national hero for his stanch defense of the country’s security.

In 2002, India’s ruling National Democratic Alliance helped Kalam win an election against Lakshmi Sahgal and become India’s 11th president, a largely ceremonial post. Known as the People’s President, Kalam set a goal of conducting 500,000 one-on-one meetings with young people over the course of his five-year term. His immense popularity led to him being nominated by MTV for a Youth Icon of the Year award in 2003 and 2006.

After leaving office in 2007, Kalam became a visiting professor at several universities. He formed the “What Can I Give Movement” in 2011 with the goal of creating a compassionate society, and in 2012, his efforts to improve healthcare led to the release of a tablet for medical personnel to use in remote areas.

On July 27, 2015, Kalam suffered a massive heart attack while lecturing at the Indian Institute of Management and subsequently died at the age of 83.

Kalam was laid to rest on July 30 with full state honors in his native Tamil Nadu. In honor of the scientist and former president, the southeast Indian state government of Tamil Nadu created a “Dr. A.P.J. Abdul Kalam Award,” which recognizes exceptional individuals who promote the sciences, students and humanities. The government has also established Kalam’s birthday (October 15) as “Youth Renaissance Day.” Discussion about building a large-scale memorial at his burial site is underway.

Among his many accolades, including honorary doctorates from 40 universities, he was granted the Padma Bhushan (1981), the Padma Vibhushan (1990) and the Bharat Ratna (1997) — India’s highest civilian awards — for his contributions in modernizing government defense technology. He also wrote several books, including the autobiography Wings of Fire in 1999.

1960: Joined the Aeronautical Development Establishment of the Defence Research and Development Organisation (DRDO)

1992: Appointed the Chief Scientific Adviser to the Prime Minister and the Secretary of the Defence Research and Development Organisation

2007: Stepped down from the presidency of India

2012: Launched a programme for the youth of India called the ‘What Can I Give Movement”

1) I love my profession, journalism.

2) As a young at heart journalist, I am a partner in national development.

3) As a young at heart journalist, I will always increase my research and analysis capability through university training.

4) I will promote through media the good news about the nation wherever it take place.

5) I will visit water bodies in panchayats and report, how it is maintained.

6) I will celebrate the success of our people particularly in the rural panchayats, whether it is in agriculture, fishing or craftsmanship or tourism.

7) I will propagate innovative growth and success stories to different parts of the country for emulation by similarly placed people.

8) I will report innovations, societal movements wherever it occurs.